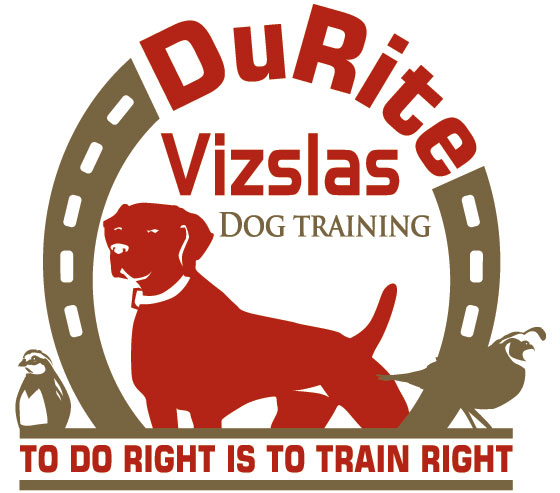 This is a personal story. We aren't looking for any oohs and aahs, just want to explain the everlasting impact a special dog can make for a lifetime.
In 1998 we thought we had it all. Actually we did, we had a new home that we built the year we were married. My husband had a good job and was in college finishing his degree while working full time. I had recently finished cosmetology school and was expecting our first baby. We knew all along I would stay at home and be a full time Mom until our children were in school. Our first baby was born in March of 1998. Oh my, she was a beauty! We were the proudest parents ever! Mike and I have been together since highschool, we always dreamed of living our lives together forever and a house full of children.

Soon after our beautiful daughter was born I began feeling chronic fatigue. At first I assumed it was due to being a new nursing Mother. The tiredness persisted along with flu like symptoms. In my heart and mind I knew something was wrong. I know God was tapping on my shoulder saying, " don't ignore me." I honestly think my husband, Mike and my sister thought I was experiencing a bit of post pardum depression. Not that I was depressed, but I insisted that something was wrong with my body, I just wasn't myself.

When our daughter was about 12 months old I began experiencing nausea and low grade fevers. I thought perhaps I was anemic. I continued to try to reason with why I felt as horribly as I did, all the while keeping an open ear to whomever was saying, "don't ignore your body."

The last straw was when I began having sharp pains in my chest along with all the other symptoms. I made an appointment with my doctor. The result was Hodgkin's Lymphoma. (cancer of the lymphatic system). Our beautiful baby was 14 months old and she was still nursing. As soon as the results of all the tests were given, I remember praying to God that our baby would be able to get through the next few nights without nursing and that if I could just get a chance to live and see our baby grow up, that's all I was asking for, a chance! My oncologist, a very special lady visited my hospital room and looked me in the eye and made me a promise, " You can be cured and you will see your daughter grow up."

I began 6 months of chemo therapy the following week. There are several things about our story that have impacted our lives in a way that is so amazing and unforgettable that they have to be mentioned and they will never be forgotten! Mike planned to take FMLA during the weeks I received chemo therapy. He filled out all of the appropriate paper work and returned it to human resources. The following day, Mike's boss informed him of a 9 am conference call with the company's president. As Mike sat in the office, a nervous wreck over his personal situation and unknowing of his professional situation, the president says to him, " I understand your wife is sick and you have a young child at home." He went on to say, " During your wife's six months of chemo therapy treatment, you take these six months off of work, take care of your family and your salary including all bonuses will be paid in full and your position will be held until you return." We can never repay his company for their generosity!! My sister, she's an angel! She is a nurse and at the time I was diagnosed, she was working a ton of hours at the hospital. She went from working 50 plus hours a week to working only two days a week. She devoted her life to me and to being my full time care taker. This helped in more ways than I can ever describe. With her being constantly by my side, it allowed, Mike to take care of our daughter. It allowed him to entertain her and keep our daughter busy enough to not be so affected by the fact that I was sick. He could take her to the park and do all of the daddy stuff, which meant that I could suck it up enough when our baby was with us to not " act " sick.

During the six months of treatment I had a lot of time to reflect on who I was, what my inner most thoughts and fears were and what I wanted my life to be, if I got a chance to live it. Mostly I just wanted to be a Mommy!! I prayed every single day and still do, "God I'm not asking for too much, just please let me raise my children." Our second baby was quite a surprise to everyone!!! I finished my last chemo therapy treatment in late October and found out I was pregnant in late January or early February. Our Oncologist suggested we abort because she was concerned about my body being in an immuno compromised state.

After about a split second discussion, Mike and I said, "no way." We have trusted God all of our lives and we knew we just needed to put this in his hands. Our second baby arrived in October, perfectly healthy. As I said earlier I had lots of time to think about my life and what I wanted from my life. I remember thinking if I made it through this trial I should find something that I truly enjoy. After all I knew first hand, life can be short and can bring the unexpected.

I thought about taking violin lessons, but honestly I'm not very musically talented and I wanted to find something we could all enjoy. I came across a Dog Fancy magazine and the Vizsla was the cover dog. Instantly I was taken back by its beauty, then I began reading about the dogs' characteristics and I was convinced we needed a Vizsla!

The search began. I called a few breeders and was referred to a lady in Illinois. I knew she had one male pup available and I must have called her 100 times that day. Finally she returned my call. The deal was done. Mike would meet her in Northern, Indiana and bring home our new puppy. Quite honestly we couldn't afford the purchase price of the dog. We were in medical debt up to our eyeballs, but my husband being the awesome man he is wasn't going to burst my bubble!

Mike returned with this beautiful puppy. We would call him, Duke because it would be easier for Mikayle our oldest daughter to pronounce, being one syllable and her just learning to talk. We needed to come up with a registered name. That was tough. It really doesn't seem to make sense, Pointe Blanc's Rusty Miracle. Pointe Blanc's is the name of the kennel and breeder and Rusty Miracle, well I felt pretty rusty after battling chemo therapy and jumping right into another pregnancy and miracle, well it was all a miracle. The fact that I was alive with now two beautiful baby girls, the fact that my husband had an awesome job and is such an amazing husband, person and father, the fact that my sister is my best friend and will always have a special place in my heart, the fact that I decide we need this dog that was hard to find and the breeder had only one male remaining and he would be ours, was simply a miracle!!

So the journey began. I called my Grandfather, a life time bird hunter and told him excitedly, "we got a bird dog!" He asked what kind and I said, "a Vizsla." He said , "that isn't a real bird dog." I'm a very competitive person and from that moment on I set out to prove to my Grandfather that, Duke was the real deal.

We sent, Duke to a trainer in, Michigan, Gary Jagoda. I honestly thought we were just sending, Duke to test his natural ability. The next thing I knew, Duke was being entered in a field trial and we were traveling from Indiana to Michigan to watch him in the Field Trial. We pack up the babies and head north. Gary asked if we had ever ridden a horse. I said, "Yes when I was a kid." Mike said, " No, never." Gary explained his horse lesson 101, "Your dog is up, you need to get on and ride and watch." Mike and I rode Traveler and Smoke and watched Duke compete. Duke was spectacular and we were hooked. That season we traveled to several weekend field trials with our children. We watched Duke become the # 1 puppy/derby dog in the country. Gary Jagoda mentored us and tried to teach me how to handle Duke.

Most importantly Duke changed our lives forever!! He gave me hope when things seemed hopeless. He gave me something to look forward to that helped me keep my mind off of fear of a relapse. He was our our kids' first dog. He was the foundation for our breeding program. He made my Grandfather a believer! He gave our family an opportunity to fall in love with this beautiful breed and become addicted to the awesome sport of horse back field trailing.

Some people say they don't believe in Miracles. Well we do. We've had more than our share and "Duke" Pointe Blanc's Rusty Miracle was one of them. 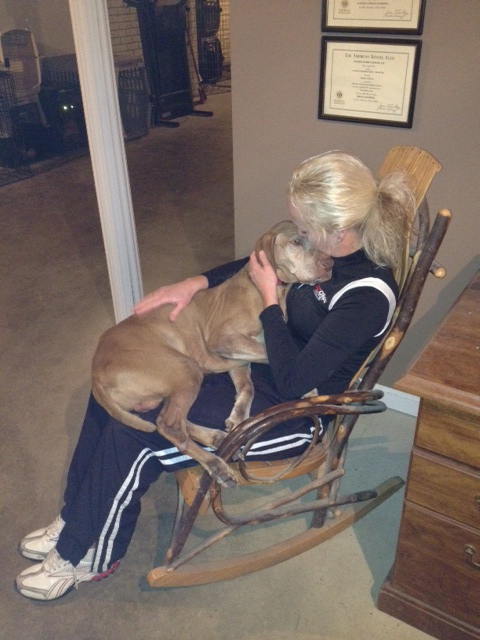 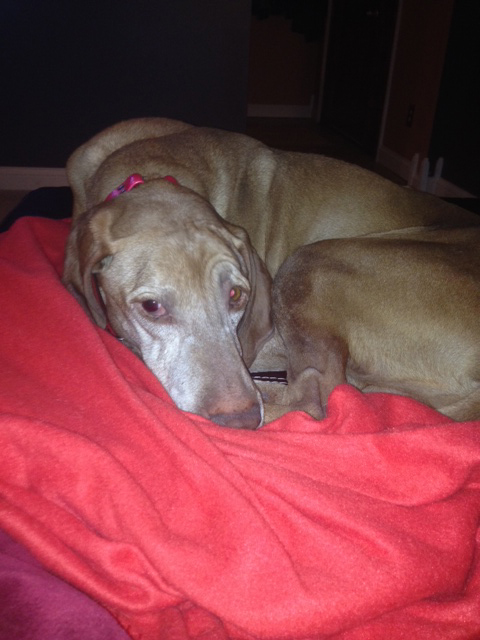 Duke’s five generation pedigree is impressive & heavily titled. As a young pup Duke displayed a lot of potential as a bird dog. He has a high level of energy, a keen nose and great work ethic. With those characteristics being prevalent we chose to compete in field trials with him. As a young puppy / derby dog Duke dominated the weekend trials. His consistent wins placed him as the number one ranked puppy / derby dog consecutively in the Vizsla News. Duke’s shining moments as a puppy / derby dog are:

Duke is currently competing in Gun Dog and Shooting Dog stakes. He was recently ranked the # 2 Top Ten Gun Dog in the Vizsla Club of America Magazine.

Not only is Duke proving himself in the field, but so our his offspring…

As a stud dog Duke has characteristics which will certainly improve our breed. He is a high class bird dog with an extreme drive. His work ethic is admirable. Duke has a great deal of stamina which we all know is vital to be a National caliber bird dog. He displays staunch style and he hunts a course wisely. Another important characteristic which Duke possesses is that he is an awesome companion. He lives in the house with our family & two little girls as our pet.

In the book, “ Field Trials” by : William F. Brown it states what it takes to be a successful field trial performer.
* Must possess great speed
* Bird sense ( The possession of this quality enables a dog to apply his inherited instincts & natural qualities to the best possible advantage when he is searching for game.)
* Style ( Enhances the pleasure of watching the running of field performers)
* Olfactory powers of high order ( Keen nose)
** Prepotent Bloodlines ( this is desirable in the ideal field trial dog, for the reason that while one may occasionally meets with a performer of doubtful breeding, whose individuality is so great that he impresses his own quality upon his progeny, the majority of great dogs that are the accidental result of the mating of mediocre progenitors fail to breed on with any great regularity.
* Proper confirmation ( An absolute necessity in the ideal field trial dog, for unless he possesses such, he cannot compete on an equal level with other high -class dogs, therefore, the really great performer never lacks in the proper balance of parts that allows him to move without friction.